When Modi came calling Down Under

November 25, 2014
When Indian Prime Minister Narendra Modi arrived in Brisbane to attend the G20 summit, there was excitement already building up with the diaspora in Melbourne, Sydney and Canberra – the three states he was visiting besides his G20 commitments. In Melbourne where I live, the Overseas Friends of BJP (OFBJP) had planned months in advance to run the Modi Express, a special train which was to take 220 passengers to the Allphones Arena where Modi was scheduled to address 16,000 members of the community. 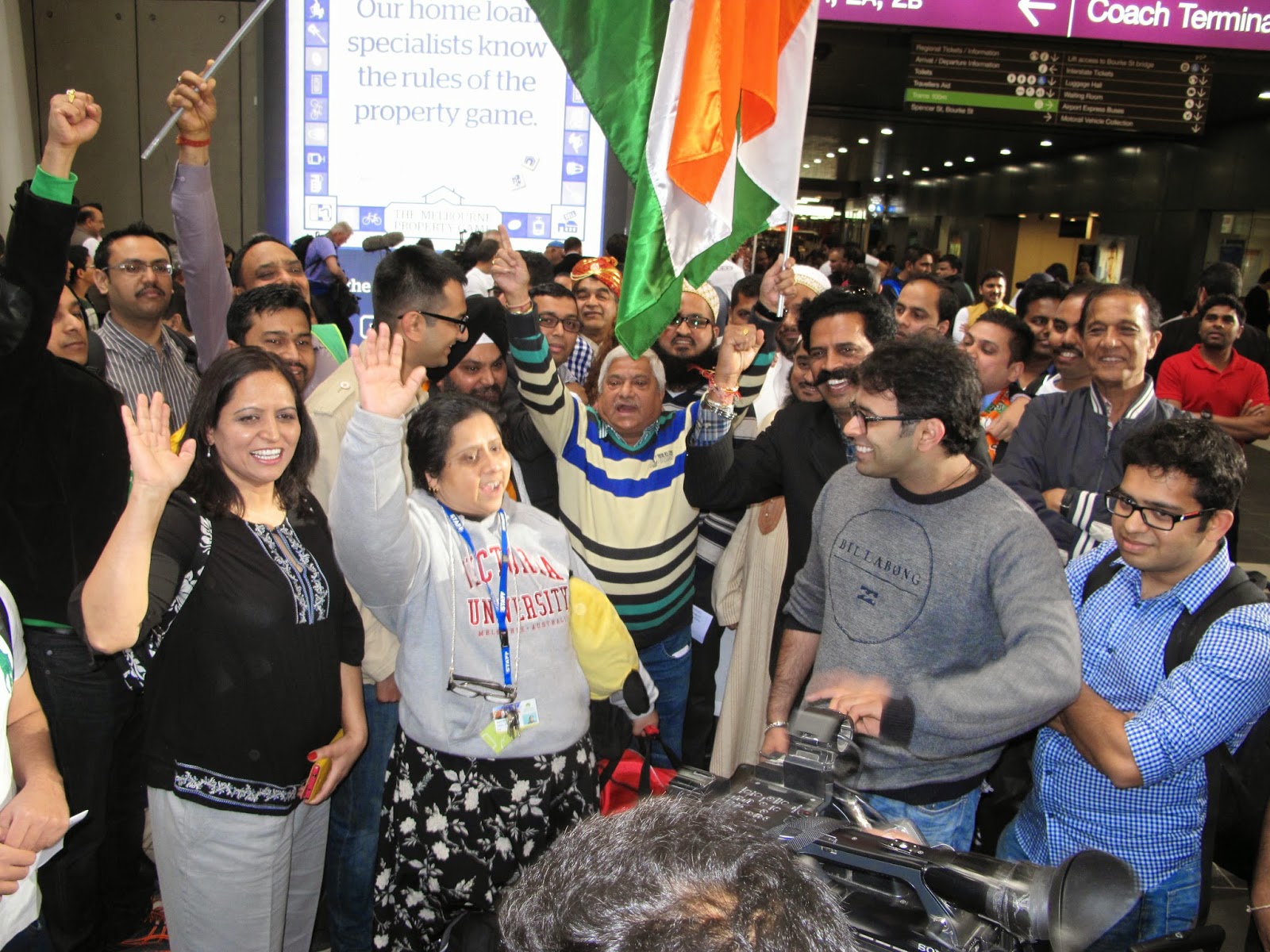 The Modi Express, brainchild of Ashwin Bora, head of the OFBJP, Victoria chapter, was meant to be a symbolic dedication to Modi who grew up selling tea in train stations, Bora told me. But he was not very hopeful that many would come forward to take part in a train journey especially in a country where flying is cheaper and quicker. But on Sunday (November 17), Bora was in for a surprise when the world’s media turned their attention on the Modi Express as it made a historic journey from Melbourne to Sydney.

Hundreds of Indian Australians descended on Southern Cross station, a major transport hub in Melbourne. As I entered the station, I was transported to a familiar world. The sight, sound and colour of the gathering reminded me of a political rally in India.  Excited Modi fans were beating the dhol, some were dancing, some waving the Australian and Indian flags, and some  selling Modi t-shirts to eager buyers.

Standing quietly in a corner were Bhupinder Singh and his wife Gunni holding two small Indian flags, their overnight suitcases by their side. They said they had spent hours making the flags at home. They wanted to take it with them all the way to Sydney. The couple in their mid 50s had taken a long journey, catching an early morning flight from Adelaide where they live and were waiting for over six hours at the Southern Cross Station to be a part of the historic Modi Express. “We are very big Modi fans,” declared Gunni. “We are going just to hear him and see him. As soon as it was advertised that there was going to be a train from Melbourne to Sydney, we quickly registered.”

Spotted among the huge crowd was also a team of Muslim members from the Dawoodi Bora community. Sharing the enthusiasm and the energy of the crowd, one of the members Sen Zahid said, “Modi is the prime minister of India and just like any other citizen, we have to show our support to all his initiatives. I think Modi has the energy to lead India and move it many steps further. We are going to Sydney to have a good time, see what he has to say and just support him.”

It is hard to imagine any Australian leader invoking such a response. What is it about Modi that creates such frenzy? asked a curious bystander, wondering if Modi was a celebrity or a star.
Vinny Mathew who was travelling with a group of friends, said, “Modi is one of the best leaders. We are proud to say we are Indians in Australia. The flag flying at Southern Cross makes a difference. All of the world, the whole media is here is looking at us now, that is the difference that Modi has made. It is history, he is making us proud, he is one man who came as a chai wallah and created history, every Indian should be looking at him as an inspiration. We are feeling very proud right now.”
Nalin Sharda, father of Bollywood actor from Pallavi Sharda, came alone to join the train journey. “I love him (Modi) so much, how could I miss not seeing him. He is a complete breath of fresh air for us. It would be my total pleasure if I get to meet him face to face. With so many people going I didn’t want to be left out. For the first time in 50 years, he is the first politician who has said the right things.” Many others spoke in the same vein.

And with each passing moment, the energy of the crowd was palpable. “Har har Modi, Modi Zindabad, Bharat mata ki jai, Vande Mataram” and a “hip hip hurray” rent the air.

Multicultural Minister Mathew Guy who came to flag off the Modi Express said it was a spectacular sight to see so many Indians coming together to attend a rally of a leader. “Obviously it is a reflection of Mr Modi having a great strength of character and being such a respected man, so it’s great to see so many people. There is so much excitement.”

Inside the train, the dancing, dhol and singing continued. The media gathered in strength to relay a unique event. Quite in keeping with the dramatic departure,  the arrival of the Modi Express in Sydney also witnessed the same fanfare. I was seeing a hysteria of a kind I had never experienced before.

A day later, Modi came to address business and community leaders at the Government House in Melbourne before he capped off his visit after attending a grand reception at the famous Melbourne Cricket Ground where Indian and Australia have met many a cricketing duel. I got to finally see and hear in person the man who had gotten the whole Indian diasporic community rocking up to see him and clamouring for selfies and photographs.

I don’t know what to make of the euphoria. True that an Indian Prime Minister was visiting the country after 28 years, but the reception matched the scale of his victory in the Indian elections just six months ago. For the 450,000 strong Indian community in Australia, Modi was a symbol of hope, change and all things good. Let’s hope Namo does not wilt under the pressure of impatient and frenzied supporters.