October 21, 2014
India-born Urmi Buragohain has just won two bronze medals for Australia at the ITF –Taekwondo World Championships, but this may be just the beginning…

If you ever thought Taekwondo is a sport not meant for women, then there are some like Urmi Buragohain who are turning that expression on its head. A black belt holder, she is just back from Rome after grabbing two bronze medals for Australia at the recently concluded ITF-Taekwondo World Championships held there. 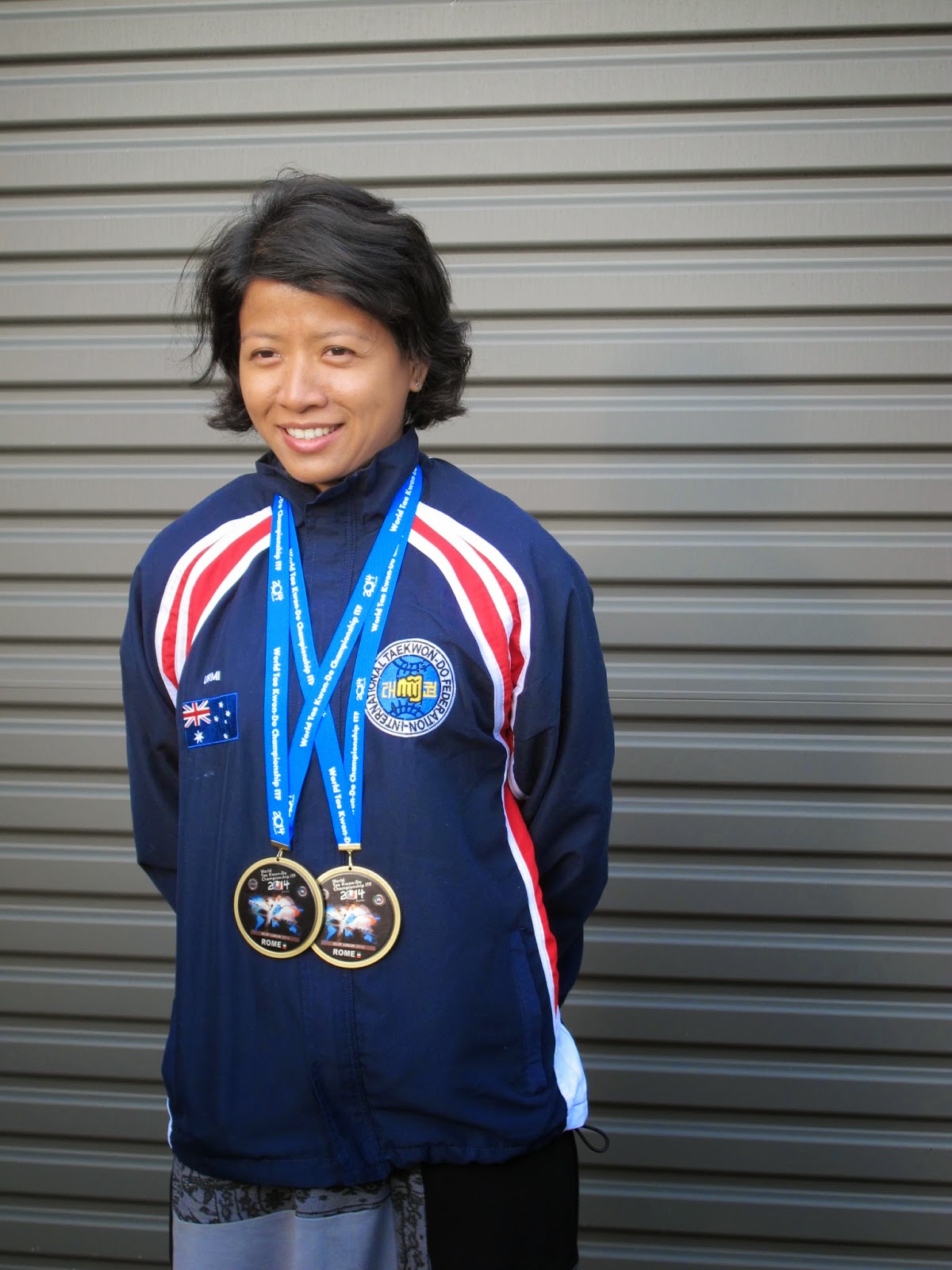 Urmi’s association with Taekwondo goes back to her roots, growing up in the north eastern Indian state of Assam, where martial arts and Bruce Lee films were quite an influence. However, it was much later in life that she took to the game consumed earlier by studies and a challenging career. But such was her perseverance that she took it to the world stage level surprising everyone, including herself.

It was her first world championships and Urmi, who works as a Strategic Planner for the City of Kingston, had no idea what to expect, except that the level of intensity would be ten times more. “What I actually saw there was an eye-opener,” she says overwhelmed by the experience in this world event, where contestants from 25 countries vied against each other. “What I actually saw in the eyes of the competitor was this whole focus and the clear intent to achieve something. The level of aggression was humongous. It was intimidating and scary.”

“There are different events you can take part in. I competed in Patterns first, which is a solo performance,” explains Urmi. “When you go through the different colour belts as you train you start at the white belt level where you are given a simple combination of movements – punching, learning how to move around when you are punching and very basic blocks. But as you go higher up the belts the combination of movement gets very technical, you combine different kicks and movements, so it gets more and more complex. Within black belts there are different dan rankings and each dan has a specific pattern. I did my first dan. To move from first dan to the second, I have to have two more years of experience and so forth. You have to be really dedicated to go high up.”

So with her Pattern performance held right at centre stage and a huge crowd, it was all about controlling the nervousness and anxiety and channelizing the energy to perform, says Urmi. Thankfully she managed to do that. And although she lost to her Argentinian rival bagging a bronze in the process, there was not a big difference in the final score. “I was happy with how I performed. I was happy with my first centre stage performance.  My coach was pleased too.”

When her next match, the sparring event came up, Urmi had by then gotten over the nervousness and was ready. But she admits to being taken aback by the level of aggression. Before the start of the game at the ring, her Canadian opponent, a former Gold medallist, let out a big scream. “It is a way of intimidating before you throw the first punch. You can read the fear in your opponent’s face.”
The first round was very close. A few times Urmi was leading. She recalls seeing from the corner of her eyes her instructor jumping shouting ‘you can do it’. The Canadian was on an offensive move and took the initiative to hit her which helped Urmi counter attack, something she is good at. Thus she was scoring in the second round too when her opponent decided to change tact and was no longer chasing her. “I was waiting for her to attack but she didn’t. By then she had adjusted and I could feel my inexperience at that point. I didn’t know which angle to move in to attack her and take the initiative. So in the second round she knew how to hold on to her lead. So she won the silver.”

It is an experience that has given Urmi an added confidence for the future. “For me performing at the world stage was what was important, testing what my level is and how far I have to go to compete. It was not just a test of my physical strength but mental strength. I wanted to see whether I would fall part just seeing the level of competition and the crowd. The whole arena was like the ring in the Gladiator, people shouting and chanting and you are in the middle. It is a lot of pressure.”

Of the other international players, she says one could see the years and years of dedicated training they had. “They were super fit, so impressive and very inspiring. Then I knew that I am just beginning, there is so much more to experience and go through. You have to have a lot of mental strength and that is something I want to build on.”

Over the years Urmi says many people have asked her why she chose Taekwondo over other sports. Obviously not everyone takes up martial arts, she realises but it is hard to explain she says. “Initially I wondered how this game would be beneficial for me as I thought it is just fighting and quite unfeminine,” she laughs, adding, “I was looking at it as an opportunity to learn some self-defence techniques which would have been very useful in India and also wiser to have begun there. I was hesitant and felt very awkward kicking or punching as these movements don’t come naturally.”

After completing her graduate studies at the JJ College of Architecture, Mumbai, Urmi completed her post-graduation from the Centre for Environmental Planning & Technology (CEPT) University in Ahmedabad. And after a few years of working in Delhi, she and her architect husband migrated to Australia in 2003. It was at that time that they discovered the United Schools of Martial Arts (USMA) Club in Clayton where they lived initially. While her husband eventually dropped out, Urmi persevered in her new found passion. She was taken under the wings of club founder Master Spiridon Cariotis 7th Dan. USMA is a registered member of the International Taekwon-do Federation (ITF) founded by General Choi Hong Hi. Soon she realized that with regular training the body can gradually flex itself. Within two years of her taking it up, she had attained a blue belt.

In 2008, work commitments took Urmi to the Middle East and India for a few years. She realized this was a sport she wanted to continue. So wherever she was posted she joined clubs and continued training. As these clubs trained in the World Taekwondo-do Federation (WTF) style she had to start from scratch every time. “It did not matter what belt I got into, I just wanted to keep training and keep fit".

Interestingly, the ITF/WTF split occurred in the 1960s-70s. When General Choi Hong Hi, historically recognized as the ‘father’ of ITF Taekwondo, was exiled by the South Korean government, he established the headquarters in Austria.  The South Korean government formed the WTF which becomee the country’s national sport and the one seen in the Olympic Games. Today, both forms thrive but they have different technical aspects and sparring rules for competition.

When Rumi returned to Australia in 2012, she rejoined the USMA club at Clayton after having trained around the world. Although she never aspired to participate in tournaments, her instructor Master Caraotas encouraged her to take part in club and national-level competitions. She surprised herself by putting up a good fight against seasoned players at the 2013 National Championships held in Canberra and qualified for the 2014 World Championships. And she has just proved her calibre.


For this soft-spoken player who loves to challenge herself, the next target is the Rio 2015 ITF-World Taekwondo Championships. She is back into the rigours of practice. “Age,” she reflects, “Is just a number. You can achieve anything at any time of your life.” With that in mind, she is stoking her passion for many solid punches!