Life before & after toilet paper 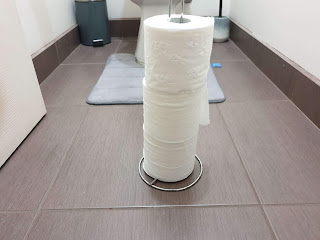 I am thinking dirty. Don’t get me otherwise. It’s just one of those memories you can’t help erasing. And it stems from a conversation my husband and I shared a few days ago. Well, inane conversations that often crop up in between long serious talks about life, career and finance. I’d threatened to blog about it and here I am reliving it again! But we all need that comic relief once in a while.

Years ago, when I was living in Delhi I always, invariably, had one reflex action – that of bowing my head in front of temples, churches or any places of worship. I am not religious but it’s perhaps a gesture of respect for the places that are deemed sacred by others. Respect is a great virtue to inculcate. Anyway, Delhi’s architecture is funny, you have dilapidated temples (some under reconstruction) and you have state-of-the-art toilets which are thankfully cropping up everywhere, you know the paid toilets where you can always do the needful, if you can’t help it.

I was once passing by a Sulabh toilet and bowed my head little realising it was a newly inaugurated toilet. Ever heard of anyone paying obeisance to a toilet! And for those who don’t know, Sulabh is an India-based social service organisation that works to promote human rights, environmental sanitation, et al.

But toilets bring a lot more funnier memories. My early memories of toilet in my hill town Shillong in north-eastern India was of this wooden one. Well, almost every cottage had a toilet outside the house. It was unique in every sense. It was like a proper elevated box. You had to climb on top of it and underneath it was a huge bucket. Every two/three days, an old man from the Jamadar colony from Gora Lines (the colony is called by that name because most of the community of toilet cleaners who lived there) used to come and empty it. As a curious eight-year old, I followed the Jamadar one day. The unsuspecting man lugged the bucket to one end of the compound, emptied it into a pit he had dug up near the walls, then wiped his hands with grass, smoked a cigarette and walked back to place the bucket where it was. Job over, he moved to the next house to carry on his routine work for the day. If anyone was to study the evolution of toilets, there are some reference points here.

Years later, working as a rookie journalist in Delhi, I wrote about the evolution of public toilets. So, when I was called for an interview for a Chevening scholarship I had applied, the panel of interviewers chose to begin by asking me about that particular article. I had to begin by explaining that my visit to one of the largest bus terminals in Delhi, where half the population urinated in the open air, forced me to write about toilets and raise the question of why we couldn’t have clean, public toilets so that everyone was spared the sight and stench of open urinals. For once, I had a problem sitting through an entire interview.

But more recent is a toilet story from Melbourne when I newly moved into the city. There used to be an Indian shop in Rosanna where I lived initially. The business has since shut shop. But those days it used to be one of my regular haunts and the lady (let’s call her Meera) who owned  the shop was quite a repository of news and gossips. I loved them all.

Meera dealt with a major chunk of Indian customers on a daily basis, so she had plenty of stories to tell. And this one of a south Indian Tamil boy working as a toilet cleaner in Royal Melbourne Hospital is one that stands out in memory. Boy goes to India and sells himself as an ‘Environmental Officer’ in the marriage market. Of course, he fetches a bride with impressive dowry – a two-storey building in prime location where he moves his parents on the ground floor and rents out the first floor. A year later, the bride is ready with her papers and about to land in Australia and environmental officer is in panic mode. He tells Meera, “She is coming, I need a better job soon.” Now, I wish I knew the rest of the story but Meera has moved suburbs.

Cut to the present. The toilet paper crisis in Melbourne is making me laugh. You see, there are some things to like about the coronavirus because it makes you laugh. Although, before I go on, I think if people stopped looking at their phones and WhatsApp or Facebook for at least a week, this crisis could have been averted.

Now, coronavirus is a respiratory complaint, not a gastronomical ailment. So where is the connection between toilet papers and coronavirus? My friends have been calling up to find out if I am stocking up on toilet papers because they feel like it’s the apocalypse. Seriously.

Thankfully, I have a few rolls but I am starting to worry now as I am told most shops don’t have them on display. But it is not like Australia imports toilet papers. I am told Amazon also does not have them. Someone, please give me the calculus between COVID19 and toilet papers. At this rate, we might have to depend on the junk mails. It also does not help to have a husband who is the least concerned even if a hurricane was headed our way! He is definitely not part of the collective nervous breakdown.

I decipher two things out of this mayhem. One, people are so stupid and that people are indeed selfish. There is no way that toilet papers are going to save you from the coronavirus. If you read carefully, all you need to do is wash your hands properly for 20 seconds. So, the one thing you should be stocking up is soap with consideration for others because, again, it is no good if others don’t have clean hands because the virus will travel to you.

The women fighting in a Sydney supermarket aisle made me reflect on how selfish we have become. What is the harm in sharing a toilet roll? Civilisation is indeed a thin veneer, it takes one toilet paper to bring out the worst in us. We are going to kill each other when it comes to food and water.

My friends, stay calm, drink wine. If you want to come over, I have a simple request: bring over a toilet paper instead of wine. There was and there is life before toilet paper.