July 06, 2015
I am not an early riser. Getting up at 5 am in the morning is a great accomplishment for me. So two weeks ago when I woke up at the dawn of a very cold winter clime – it is the thick of winter in Australia now - I felt a great sense of achievement. I have to tell you why I got up early though. Melbourne was heralding an early start to celebrating the International Yoga Day. Having been a yoga practitioner for many years now and backed by an equally enthusiastic spouse, I did not want to miss out on an opportunity to be a part of something unique. 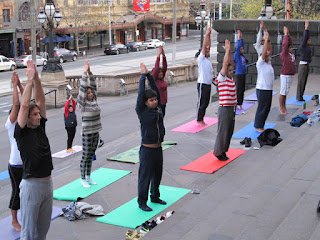 So there on the steps of the iconic Parliament House in the heart of the city were a motley group of us doing 25 surya namaskars with curious onlookers probably thinking we were out of our minds. Braving the cold we twisted and turned our bodies to the sound of a heavily accented guru who kept yelling ‘eka pada prasarana dan’ (thrust one leg back).

My tryst with yoga began many, many years ago at my dilapidated government flat in Netaji Nagar, Delhi. A young, roaming yoga guru from Rishikesh, who practically taught most of my office colleagues and who seemed to be more informed about the office gossip, came in the form of my mentor every alternate evening. As I sweated doing squats and all the asanas, he kept his eyes glued to the newspaper and without looking at me dictated, “didi 20 more times”. Rest assured, I was burning a few calories, the alignment of my body in disarray. But those days my philosophy behind the yoga was to lose weight, and only weight!

My real understanding of yoga began at a quiet suburb of Melbourne called Fairfield – far from Rishikesh or Delhi. Here at a quiet studio, my teacher Vivienne O Brien, a former student of late BKS Iyengar, taught me how yoga seeks to align the structure of the body. I could not escape her hawk eyes - each pose underpinned by resistance from the base so we can extend. “The more resistance you can create in your body the more energy you create to lengthen and align,” she repeatedly drums into us. I have come far from the time when I hardly followed her Australian accent; so when the class was turning left, I was turning right.

Yoga is not a fringe activity in Australia. Everywhere I go, I see so many yoga studios. If this is the window to the awareness around yoga, it has done pretty well. Australia’s longest established research company Roy Morgan reveals that in the past decade, the number of Australians who practise yoga either regularly or occasionally has more than doubled from 910,000 to 1,836 million. I now understand why this activity so popularised by Hollywood stars and America has caught on with Australia too. The fascination with Indian spirituality and mysticism is big.

No doubt yoga is now mainstream and an integral part of the well-being industry. It has moved into gyms, corporate spaces, educational institutions and various clubs. And even at smaller levels there are efforts to popularise it. Today yoga is fuelling a $2O plus billion dollar global industry. While statistics show that America is now at the crest of the popularity wave, Australia is near the top.

So this month when the world converged together to celebrate International Yoga Day on June 21 at Prime Minister Narendra Modi’s request last year, the enthusiasm in Australia was rife too. Apart from the fact that India’s desire to market its yoga has come true, I was impressed at how this 5000 year old gift from India has carried its allure to the West. Hundreds and hundreds of yogis took to the mats in various suburbs and halls making it one of the biggest events to take place here.

Over the years, yoga has taken many dimensions. Today there are Iyengar, Ashtanga, Bikram, Vinyasa, Kundalini, Hatha, Jiyamukti, Restorative, to name a few. Friends who go to Bikram Yoga tell me how they sweat it out for 90 minutes in a 40 degree room temperature and have a good sleep at the end of the day.

An Indian yoga teacher I met during the event rued about how the path to divinity is lost in the practice of yoga in the West. When I recall my teacher Vivienne’s teachings, I don’t know if there is divinity in her teachings. I am not a great believer and wonder how a few stretches and poses can have a profound impact on one’s spirituality. What I have learnt, however, is engaging my mind with the practice and feeling the resistance and extension when I am in the room. Vivienne says this itself is an inward looking process that gives us clarity and is a portal to our spiritual journey. I do understand my body and I do know my limitations. Hopefully I can expand myself to my fullest one day - as a matrix spanning the mental to physical and everything in between!