Tanishq Ad Is A Clincher

November 14, 2013
Someone once said the raw material of advertisement is life, but that is true of all creative arts I think. I do not watch much of television but being on Facebook makes me connected to all news Indian through friends. So when I saw the ad on Tanishq attached to friends’ status, I ‘shared’, something I normally refrain from because I do believe over publicity is nauseous nor do I like attaching myself to brands. 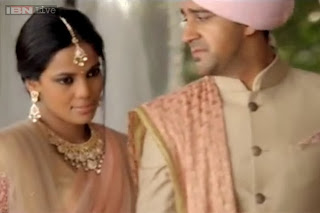 The new Tanishq ad created by Lowe Lintas India with filmmaker Gauri Shinde has a dusky widowed woman getting married again. As she does the ‘pheras’, a ritual where the bride and bridegroom go around the fire saying their vows, her little daughter asks if she could join the ceremony. The scene is poignant as the new father takes her in his arms and together all three of them complete the ritual. Two things stand out in the ad – the portrayal of a dusky skinned bride in a country where being ‘fair and lovely’ is the benchmark of beauty, and the idea of second marriage in a country where the place of widowed or divorced women is often in the periphery of society. They are definitely a break from tradition. In the words of Arun Iyer, national creative director, Lowe Lintas, the ad definitely  “makes a bold, progressive statement”.

When Nina Davuluri won the Miss America pageant recently her critics argued she is not a typical Indian beauty. As one news article hilariously summed up, “Because her epidermis is far too many shades removed from ‘fairness’ for her to be considered beautiful. This matter is, in the Indian dialectic of beauty, nonnegotiable. In matters of pigment, Indians can be as dogmatic as party chieftains once were in Stalin’s Moscow.” Which explains why in 2010 the whitening cream market was worth $432m and growing at 18 per cent per year, according to marketing research firm ACNielsen. Actress Nandita Biswas, the poster girl of ‘Dark is Beautiful’ campaign has said this obsession with fairness has led women to the brink of suicide.

Our ‘Snow White Syndrome’ is rooted in caste and culture and it is appalling that we are still talking about it in the 21st century. I am guilty of prejudice myself and having been swept by a pervasive culture. Growing up, I hated the sun as I thought I would go darker. In adulthood I am more comfortable in my skin than I ever was. I also must admit I love living in Australia where brown is considered beautiful and where people love their tan. Arriving once more at the universal truth that for us humans the grass is always greener on the other side!  Also, that physical appearance or the colour of one’s skin does not sustain relationships or does not make lasting impressions. What matters really is what is inside us, our thoughts, feelings, and intelligence – the intangibles. My mother’s wisdom - if you are beautiful from inside, you are also beautiful from outside - that made no sense as a kid is old but that is my beauty share for today. Of course, I do love possessing a dream beauty bag of my favourite cosmetics and perfumes but those are some things that money can buy.