November 08, 2013
Lakhwinder Singh Dhillon has been driving a taxi on the roads of Melbourne for the past 11 years. One Wednesday night, when Dhillon reached home, he told his eldest daughter Shabneet, that he had a test that night, one where he passed. Soon after, the days that followed saw Dhillon become the darling of the media well known as Melbourne’s ‘most honest cabbie’.

That night Dhillon picked up a group of nine passengers from Little Burke St and dropped them at Crown Casino. Immediately another bunch of 11 people got up to be dropped at another point in the city. When he had finished dropping the two sets of customers he was driving home when he suddenly noticed a bag next to his seat. Confused as to which group the bag belonged to, he opened to check if there were any visiting cards or any clues but instead he was stumped by what he saw – 100,000 worth of cash and casino chips worth 510,000 dollars . 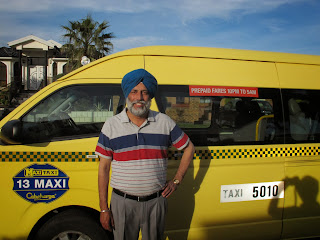 Dhillon’s first reaction was panic. “I had never seen such huge bundles of cash,” he recollects. But he remembered one of the first rules while training to be a cabbie: that lost property must be reported to the police in 24 hours. “I thought let me get out of here and I was a bit scared too. I thought if I told anyone there could be many claims for it so I headed for the police station,” he says. But just three minutes before he reached the police station, he got a call from 13 Cabs, who had given him the job, asking if by any chance a bag was found in his cab. Dhillon replied it was not just a bag but a bag “with a hell lot of money”. He was asked if he could go back to the Crown and hand over the bag to the owners. At the Crown, Dhillon wanted to give the bag to the person who had sat in front next to him for his own mental satisfaction that it was delivered to the right owner but on the assurance of the manager at Crown, he gave the bag to him. Calling him a good and honest person, the manager gave him 500 dollars as a token of appreciation.

Slowly the press got hold of Dhillon’s story and he became a celebrity overnight. From radio stations to TV stations to print media, Dhillon was hounded. The question, of course in every one’s mind being, what happens to one’s integrity when one is suddenly confronted with such amount of money? Dhillon laughs thinking about the whole incident and says he is the happiest man for doing the right thing. “I am not greedy for money, I have a happy life and happy with whatever money I make, I don’t want any trouble.” In fact when Dhillon was told that at a discussion on a news channel about him, former Victorian premier Jeff Kennet was supposed to have remarked ‘only 500 dollars for gratitude?”, Dhillon says a pat on his back was more than enough.

After the flak that Melbourne’s taxi drivers have received of late, Dhillon’s act, it would seem, have resurrected some of the reputation. Dhillon, who does mostly day jobs, believes,  “If you are good, everyone is good, if you are bad everyone is bad, it depends on your behaviour. If you know how to talk to your customers there is no problem.” In fact in the long span of his career he mentions having had only four incidents where people have ran away and not paid money but “you just take it in your stride. Besides there is no point chasing after 15-20 dollars going to the police etc., you waste more time when you could have done a 50-dollar job in that time. Most of the time I do airport jobs, meet nice people, hear good stories, you joke, you are happy. Problems sometimes happen at night.”

A devout Sikh, Dhillon believes when you are attached to your guru you don’t want to do something wrong. “My parents always taught me to keep the three teachings of the Guru Granth Sahib, which is Nitnen or engaging in a daily practice of meditation by chanting God’s name, Kirat Karni or living honestly while accepting God’s blessings, and Vand Chakna or sharing wealth with the community.” Clealry, this is something Dhillon inculcates in his daily life and something he instils in his children too. Since having arrived in Australia in 1999, he says he has never missed his Sunday ritual of going to the gurudwara. In fact, the Craiggieburn Gurudwara has also felicitated him for his recent act.

Dhillon hails from Kairon Village in Amritsar. He is very proud of the fact that legendary former chief minister of Punjab Partap Singh Kairon, who was also a leader of India’s Independence movement, hailed from the same village. Kairon was also a very close associate of his grandfather, who was the sarpanch of the village. “They were like brothers,” he recalls. After completing his post graduation in marketing management, Dhillon moved to Kenya where he was a teacher and later dabbled into business before migrating to Australia. He did his course for taxi driving and has been in the profession since.

Asked if he loved the challenges of his profession, Dhillon has a very candid reply, “I don’t know any other profession. Whether I like it or not, I have to do this to make my living. If I don’t work I can’t have a good life like this.” Blessed with two daughters, Dhillon is a doting father. Incidentally with his eldest daughter getting married soon, he says, “I have tears in my eyes thinking she has really grown up and leaving us.” Life brings sad and happy moments, but for now, Dhillon is basking in his new found fame. He gets a wave, a halt, a chat from practically everyone who has seen him on TV or read about him. But all he says is, “Mate, it was not my money.”