December 10, 2012
It is hard to imagine Kiran Bedi without her baton, cap and police uniform. On  a cloudy Friday afternoon in Melbourne, India’s legendary supercop queues up for lunch and then sits down to sign autographs of her book Dare To Do. Dressed in a light coloured salwar kameez and Nehru jacket, she is in a hurry as she is about to deliver a keynote address at the Argumentative Indian seminar hosted by the University of Melbourne’s Australia India Institute. As it turns out, many are waiting to listen to India’s first woman police officer whose career was marked by fame and notoriety. 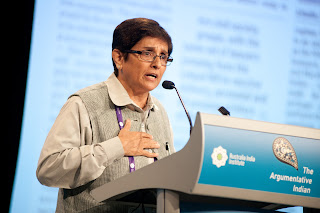 Two incidents stand out in memory when I think of Bedi who joined the IPS in 1972 as the only woman recruit: her facing an angry mob armed in swords with just a baton while her fellow policemen ran away in fear. And, when she towed away Prime Minister Indira Gandhi’s vehicle for a parking violation and got nicknamed ‘Crane Bedi’. The stories that surround her are indeed the stuff legends are made of especially against the backdrop of India’s debilitating corruption system. Little wonder then why she never became the commissioner of police despite her excellent career in the forces.

Post retirement, Bedi is still in the news having become a senior member of India’s anti-corruption movement. Bedi’s anger was rife at the Argumentative Indian Seminar where she defended that the movement has not lost its steam and percolated down to the masses. She managed to stir the conscience of India to an audience that held her in rapt attention.

Bedi came with hard hitting facts - newspaper clippings and data, documents she said she has been collecting for the past two years when she became a follower of Anna Hazare’s anti-corruption movement.  “I was a police officer focussed on my work and dealing with politicians both good and bad. But the last two years I came face to face with them and that’s the time when I started to look more closely at them.” She clarified she was a neutral, non-partisan, non-political person.

The movement’s objective is to get the Lokbal Bill or an ombudsman. But, said Bedi, the challenges were many. For one, India’s biggest challenge as the largest democracy is its 740 million voters who do not understand the power of democracy. “We have 543 state assemblies, 4032 representatives, 638,596 villages and, 220 registered political parties. In fact, India produces one Australia every year. But India lacks the mechanism for selecting the best person for the most responsible job. We have no evaluation system, we wait for five years and public memory being short so we vote for the brand… and that is what the anti-corruption movement has realised as we got closer.”

Bedi educated her Australian audience with facts about Indian politicians and the huge VIP culture that surrounds them. “Till we vote for them, it’s we the people, after we vote for them, it’s who the people... A politician is seen as desperate, generally cunning and often ruthless. He probably does not know himself,” but was also quick to add, “I have honourable exceptions, some great, good exceptions.”

How the political class got to this stage, Bedi explained, was because politics In India has a vested interest in the continuity of poverty. “Declaration of assets of candidates is ritual before elections but it lacks the mechanism to investigate. The Indian Penal Code written in 1860 and the criminal procedure code 1895 were enacted but there were no ministers. Sanctions hold them back because every time you have to prosecute them you need a sanction but the sanction never comes. And there is such a cat and mouse story always on the sanction. In the 2011 polls every third MLA was a crorepati. Money has been used to buy votes. The Association of Democratic Reforms (ADR), an NGO, puts up a list on its website but nothing happens. Therefore, politics in India has been for some the best investment.”

Today, India needs 1 million schools but statues are erected instead. India has only 5000 vocational schools whereas China has 500,000. We have 400 universities, Japan has 4000. The cost of misgovernance is costing the government at least 2 3 per cent, which amounts to millions of dollars. Graft is hurting India’s economy. India has a geriatric power with the average of the Indian being 25.9, and the Prime Minister’s at 80. Therefore, risk averse. People are already talking about youth reservation in India. It was obvious Bedi did not want to make the session a dull one.

And so she ended her address with a solution, a way forward such as movements to educate voter awareness for day to day democracy and urged non-resident Indians to become a pressure group in the bid to get the independent ombudsman. . “Get united”, she urged NRIs. “You are not a pressure group but we have woken up now. That’s my purpose of coming here to connect NRIs around the world… The amount of money we lose in corruption is mind boggling, and imagine if the billions of dollars somewhere overseas stashed away every year came back, we will have all our infrastructure, become tax free and, then, perhaps, Australians would like to come to India, rather than India going to Australia?” she summed up.

It was clear Bedi  energised the audience. Her speech was indeed powerful, passionate and provocative. I had the pleasure of listening to Bedi, although much of what she said was nothing new. Of course for a western audience, the facts were appalling. I don’t know if much of what she said registered with the NRIs present. Many were queuing to have their photos taken with her while still admitting she was almost narcissistic. When the chair introduced her as a policeman, she was quick to correct, ‘policewoman’. It is not ironical that a movie made on her by an Australian has been rightly titled ‘Yes Madam, Sir’.

Someone rightly said, you can love her or hate her but you can’t ignore her. That has been the history of Bedi’s career and her personal life.

Sabarmati View said…
This comment has been removed by the author.
10 December, 2012

Sabarmati View said…
You should have seen her during Anna Hazare's movement. She cut a sorry figure and she was probably the only one person who got negative publicity even though the whole country then was rooting for the anti-corruption agitation. I find her too undemocratic, arrogant and a person whom the middle class will adore for all wrong reasons possible
10 December, 2012

Indira said…
well i think the fact is nobody in india really gets into public life without a vested interest and that may also be true of her, hence the negative publicity. that she was once an icon cannot be denied though!
11 December, 2012

Free Antivirus Download said…
there is Kiran Bedi here in picture and all Indians proud on her. free antivirus download
05 March, 2013