Where The Monks Come Home

June 06, 2012
They say what you remember is not the same as what you witnessed. But I am hoping the reels of my memory are still as sharp as a camera’s. Mcleodganj, a little, busy town surrounded by snow capped Himalayas, rich pine trees and gurgling waterfalls and a few lakes has been home to Tibetan refugees for many years. The story goes that Tenzin Gyatso, the 14th Dalai Lama fled here in 1959 after a failed uprising against Communist China. Since then, many Tibetans have found refuge here.

At the Himalayan Yoga Centre right up in Dharamkot where we had gone for a small retreat after five weeks of roaming around India, I found myself among a group of mainly western tourists for whom spiritual India was beckoning at these foothills of the Himalayas. There were people of all ages suffering different ailments -- acute backaches, short arm arising out of a surgery, knee injuries, etc. I felt my ankle sprain was a dot in this sea of injuries. But I was here to see how yoga heals. 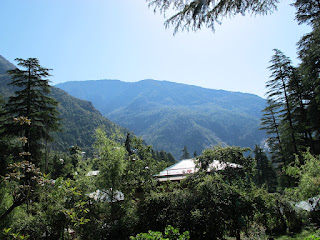 Part of me has always believed that yoga means anti-aging, after all didn’t Hollywood actors glorify it so much, when, probably, the truth could have been botox and fillers. Well, I am not cynical about yoga but I have to admit my reasons for taking to it are far shallower than others. I do it for the fun, for the friends I have made over the years going to Fairfield and for my partner, who believes doing things together is good for us. Must we follow each other like a poodle, I often joke. “We go together but we are not losing our individuality,” he quips.

Dharamkot was idyllic but it had its surprises in the form of our teacher Bihata, a Norwegian, who with a bit of finesse could pass off as a super model. Her accent was intriguing but her explanation was far reaching. In the quietness of the hall, we found ourselves listening to our bodies through her words, which were, often, punctuated with wisdom. “Look at the base of your feet, no? That is your foundation, the root has to be strong and unless it is strong the upper part of the body will gave way and collapse, ya.” I realised the words ‘no’ and ‘ya’ were part of her initiation to India. Mine was the only smile that readily broke out in a room full of serious countenances. But then, I have never been a serious student in my life.

It was day three when we finally got to see the mystery man who ran the centre in this perfect locale.  Fifty-something Sharat, a disciple of Iyengar yoga guru B K S Iyengar, is thriving in this exotic business of selling spiritual India to westerners. He has volunteers who come for teachers training and he did have the gift of the gab. I could see where’s Bihata’s wise words were coming from. At an interactive session at the end of the course, when asked if she read any books on Iyengar yoga, she replied ‘too much reading can confuse your practise of yoga. I will read Sharat’s book when he finishes writing it”. Far from believing her, that got me, of course, really curious about her equation with the master yogi.

While Sharat’s lean frame and long hair were great attributes to his personality as a yogi, his discourses would baffle the common mind. Our bodies are full of imbalances and trying to correct one balance will lead to further imbalances because of our levels of consciousness, he said. Finding the balance lies in getting the feet, which is our foundation, strong, he added. For those who practice yoga, Sharat was emphasising on Utanasana. When a young Israeli girl Bali innocently remarked that she often watches the mirror to see that she has arrived at the accuracy of the pose, Sharat was cut to the quick. “That is not yoga, how can you let your awareness shift to the outside? Your awareness should be focussed internally.”

It was not easy being a disciple of Sharat. But then every good teacher is a tough task master, I guess. I came back with the knowledge that there has to be some good out of yoga given the number of people who are adopting this art of well being. While my ankle did not heal instantaneously, I am back to practice with the hope that belief and consistency will get me to a proper headstand – minus the props – some day! And also cut down my appetite to a certain extent, surely yoga must release some molecules to stem the appetite not whet it? I don’t want to be a fat or a pseudo yogi!

Simply Curious said…
Nice. Enjoyed reading it and the Bombay and Delhi posts... I can almost see you in them and you have not changed at all. :)
14 June, 2012

Indira said…
thanks shoma. we are now part of a mutual admiration society. i too enjoyed your posts, keep them coming :)
19 June, 2012