If Wishes Were Horses...

June 07, 2007
I once asked my mother a cheeky question: why she never thought of family planning, basing on her five kids -- one son and four daughters. She didn't chide me this time but gave me a very simple answer. She said she kept trying for another son and turns out they were all girls one after another, so when my last sister (I am the fourth in the line) was born, she said she didn't even look at her properly. And it's a mean joke we always play on my youngest sister till today, we keep telling her that she was actually picked up from near the river! Anyway, so when my nephew was born to my elder sister, who is settled in Shillong, my parents, particularly my mom, was the happiest person on earth. Mothers and their fascination for the boy child, my mom was no exception. 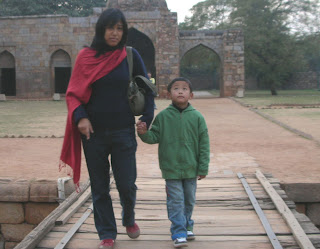 She named him Mihir, after her favourite TV actor Mihir of Kyon Ki Saas Bhi Bahu Thi, amid protest from my sister and the rest. In her last years, Mihir, my nephew and only grandson of my parents, was the recipient of all her grandmotherly affection. We attribute all his kingsize ego and spoilt nature to this powerful overflow of love from her. He lived with her from day one -- was bathed, fed, and literally taken care of. So much so, that he spent less time with his folks and more time with her. He loved her as much in return. So, it was no surprise that today, when Mihir, aged six, on a morning walk with my sister, asked her out of the blue, "Where is Bobok (grandma)?" and then started crying. My sister, over phone, told me how she just joined him and cried her heart out.

I felt so heavy at heart after this phone call. A small soul like Mihir feels the absence of my mom who passed away last September. Imagine what it does to all of us and what this means to our lives. It is sometimes uncanny how she appears in our dreams the same time and how we all remember her the same time. Just yesterday, I was telling a friend how I still half believe that my mom is no more with us. When I called up my youngest sister to tell her this episode of Mihir's, she told me the same thing: that she too was thinking about mom a lot the past few days.

There are just too many regrets in life. One that I didn't spend enough time with her. We kept planning the holidays, this winter, next summer, next holi and so on, before time just chose to stand still. And I find Mihir so lucky, in the fact that he was with her till she breathed her last. That morning when my mom was lying in discomfort on the bed, Mihir was the one who ran to the neighbours and called all of them, we were told. My neigbours promptly turned up and all of them accompanied my mom to the hospital. Mihir did his bit for his grandmother. I wish I was with him, and her. I wish for too many things. If wishes were horses, beggars would ride. Some days I go without this gut-wrenching grief, then it comes back to haunt me like never before... This is a dream and a reality I had never imagined.

gypsy said…
i empathise with your feelings. Years back, when my brother died, i was left grappling with regrets. Even now, there are times when the tears just refuse to stop when i think about not having been there to bade him adieu, of not having seen his face for the last time.