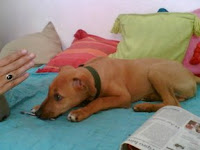 These days my house resembles a pig's sty. Some days, it's even worse. (Like the place has been ransacked and burgled, God forbid!). No prizes for guessing this one. Dylan has become a force to reckon with. The chappie has grown, and grown in width not height. I still don't know his breed, not that I care anymore. My vet, looking at his feet, skin, patches of colours, says, "Oh he is all so mixed but maybe more of a Mount Hill." Whatever that means. He is a government vet, so I chose not to get enlightened.

But Bunny, my maid, is convinced he is a desi. Except for his regal skin and cute looks, his mannerisms are all too familiar, she rues. Not without reason. She is the only one he has managed to bully. He pulls her by her dupatta, gets into her way and gives her a hard time when she is with the broom. And he loves to dig the dustbin which she clears everyday. So lazy Bunny has to work twice as hard. Together, they can ruin anyone's peace of sleep."Didi, didi, didi..." she whines each morning, while Dylan with the jingle bells around his neck goes on a non-stop musical tour of the house. Finally, I pick my stick and intervene.

Never have I seen a dog who digs human company so much. He hates the sight of us leaving for work. One evening, as my sister was preparing to leave, he actually sat on her coat and refused to budge. So, every evening when I turn on the keys (even softly) to enter the house, he is already by the door ecstatic. Immediately, he hops on to the chair nearby, his palms outstretched. I have to massage his ears and give him a hug. He then follows me wherever I go, has himself invariably entertwined on my legs, clasping them with his paws. He wants to play. I am tired, so after a while, stick to my rescue, he reclines in his cot, which is there just for its name. Dylan sleeps on my bed. On a typical day, it is him, I and my sister jostling for space.

And boy he loves to sleep. So he wakes up only when we do. Sometimes I tell him 'what is the use of having you'. If a thief was to come, he'd find all three inmates sleeping like a log. He has such a chicken heart for all his superficial barkings, that it is enough for the neighbour's cat to miaow for him to run for his life. My friend, who lives in a zoo almost (with her six dogs), tells me I should send Dylan for a week's training in one of these institutes for pets. I say, he will learn it all alright, but the moment he steps into the Laisram household, he will chose to forget it.

Her dogs are all so trained and sophisticated. They perceive intonation, understand body language, eye contact, they will pick a ball, you name it. I am so ashamed of Dylan. He loves filth, he hates his baths and he doesn't understand English except for No and the stick! No corporal punishment but I make such a sound with the NO (call it pent up frustration), that the coward in him gets the better of him. But I thaw so easily seeing his puny face that I immediately reach out, at which Bunny reacts, "Bigaar rahi ho aap isko" [you are spoiling him thorough].

Looking around at the mess in the house one day -- shoes, papers, brushes, polythenes all moved from their respective places and bitten, cushions displaced, and lampstands moved -- I asked my sister, should we give him away? No sooner had I said that than we looked at him, then at each other. We knew the answer without even saying it aloud. Too late, goodbye is next to impossible now!