A Date With Saroo Brierley

August 05, 2013
Saroo Brierley is such a lovely, lovely man. It was at the leafy, green suburb of Eltham that I was invited for an in-conversation at a not so prosaic Indian restaurant with this young man who has suddenly been thrown into the limelight after the story of his life became public, unintentionally. 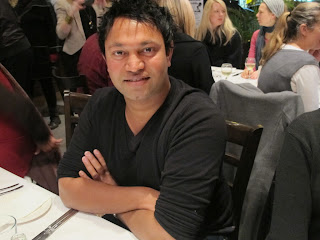 The story of Saroo is the stuff films are made of. He was born to a very impoverished family in Khandwa, in the central Indian state of Madhya Pradesh, who spent their time scavenging or begging for food while his mother worked as a labourer carrying stones and bricks in construction sites. His father a Muslim left the family when Saroo’s younger sister was a few months old. His two elder brothers and mother toiled away to bring food home while Saroo spent his time looking after his younger sister. Saroo’s Hindu mother never remarried but used all her time and energy to look after her children. One fateful day, Saroo accompanied his older brother Guddu for some fun and adventure. They caught the local train to the other train station which was a few hours down when they decided to get out of the train station. Tired and sleepy, Saroo decided to sleep for a second on a bench and his brother told him to stay there till he returned. But when he woke up, his brother was not there and there was a train in front of him. Disoriented, he hopped on to the train in the hope of finding his brother inside. It would be a decision that would change his life forever.

Once inside, Saroo found an empty seat to rest thinking that Guddu was a couple of carriages down and would walk his way up to him. He fell asleep again only to wake up in Kolkata amid a vast sea of people. For days he spent time at this big train station trying to work out if he could take a train back to where he came from. He could hardly coin the name of the place he came from and no one paid heed to his call for help. “I went through a lot of life threatening situations. I was extremely scared but I got through everything and managed to and the way that I did it was quite amazing by myself,” he said. 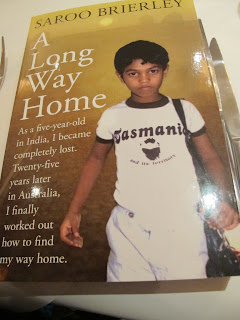 One day a good samaritan took him to a police station, a place Saroo feared having seen his brothers get in and out of jail for petty reasons. Strangely enough, that day Saroo knew he would be safe in a way and get food to eat. From the juevinile delinquent centre, Saroo was transferred to the building of the Indian Society of Sponsorship and Adoption after he was declared a ‘lost child’. A year later, he was adopted by an Australian couple from Tasmania and thus began his new life surrounded by his new loving family. Yet, he carried with him a memory that he cherished and a partial identity that he clung to. He wanted to track his birth family.

Life progressed for Saroo in Australia, he attended university, worked in bars and nightclubs and did all the regular things, but there was at the back of his mind an urge to find his family. “It was a massive urge like a huge weight on my shoulders. I wanted to find out if my mother, brothers and sister were still alive.” He knew there was a possibility, he had the map of India on his wall “but it is such a deterrent, it was like trying to find a needle in a haystack.” He never gave up though there were times when he almost did. So when Google Earth came out, he thought he had such a great memory and could use his visual memory and marry them up with Google Earth. One night the search eventuated after eight years of working on it. He found his hometown and planned his way to India after taking to his parents who supported him throughout his endeavour.

After preparing himself well, Saroo landed in India. He admitted to being shocked at the “amount of Indians that I was submerged in, I have never been among so many Indians. It was exciting too.” His next step was to find his family. “My feet just took me to the nooks and crannies and the streets I used to walk to, to the suburb where I lived and right in front of my house. It looked so small and tiny, I didn’t realise I was small then and everything looked big. So I had to compete with that ordeal and just push it on the side and say yes this is the place you come from Saroo but it looks so much smaller because you are so much taller.”

Saroo found himself looking at a door that was chained up and locked and it was the door that he used to walk through as a child. “I was fearing the worst. Everything was going on at a million pace.” A lady came out from the side door and he told her his story showing at the same time an A4 paper with pictures of him when he was little. She looked at it and said these people don’t live here anymore. “After a few minutes, someone else came again, I relayed my mantra, then another person and when the last person came along I told him a little more in depth and he could understand a bit more English. He said ‘wait I will be back in a minute’ and I didn’t really know what he was up to but when he came back after 5-10 mins, he said ‘I will take you to your mother’. I couldn’t believe he said that, I asked him do you know who I am talking about?”

Saroo walked with the man just 10 mins round the corner and three ladies were standing adjacent to each other at the entrance of a door. Looking at the three from a distance, Brierley recalled looking at the first woman and finding nothing that resembled from memory. With the second there was something, he looked at the third one and said no. “Then I walked towards the middle one and she walked forward as well. And everything just came about. I know 25 years is a long time but the facial structure of my mother was there. We were just elated, extreme with emotions, I was just frozen. For her it would have been like I saw you 25 years ago and you vanished like a ghost and here you are in front of me materialised on this day. Where have you been?” But she had been staying in the neighbourhood all these years in the hope that he will one day return. “I still think about the time and the moment when I saw my mother, I will treasure that for the rest of my life and I am so fortunate, humbled and touched by you guys being here and listening to my story.”

Saroo’s powerful memoir, A Long Way From Home, is going to be made into a film soon. I found myself listening to a story of courage and determination. Prior to meeting Saroo, I had watched a 60 mins documentary on him by ninemsn. I found a tear or two slipping when I watched the scene where the two mothers meet. It was like a collision of gratitude, and shows the extraordinary people that he is surrounded with - a birth mother who lived for her children and a fertile mother who gave up everything to adopt. I was incredibly moved.