January 24, 2013
Have you ever met a so called godwoman or godman in person? Well I did and I have to talk about this one. On Tuesday night, I got a call asking if I would like to come and meet Anandmurti Gurumaa. My knowledge about ‘spiritual people’ as they would like to call themselves is zero because I have never taken interest in their ilk and India being full of conmen in the garb of spiritualists you tend to look at them with suspicion. I had a friend who stayed for weeks at a house cramped with people in a shady lane in Delhi and they were all fighting and scrambling for the baba’s attention. The baba would perform pujas during the evenings, make them drink and wash with ashes and they would pour heaps of money buying the essentials. The people went to him for all reasons – to sort marital discords, business failures, illnesses, and even vengeance on enemies! It was frightful. I had gone to meet the friend but after a few hours scooted away more scared I would pick a bug from the unhygienic surroundings. 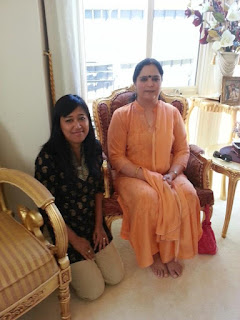 I quickly googled on Gurumaa but before that I was hoping it was the dark, fat sari-clad hugging Amma from South India whom people go mad queuing just to have a euphoric hug. I wanted to see in person this woman whose hug drives people mad. And of course I was also curious if she was a lesbian.

But turns out Anandmurti Gurumaa was none of those. Clad in a light orange churidar kurta, black shades, gold bangle, nice earrings and a touch of makeup, she was every bit the glam ascetic. I was taken in by her looks; she had a pretty face and a smile that was endearing. She walked in with a troop of followers from her ashram in India. I can imagine she lives in a sprawling campus with all the luxuries of life. But Indians are the same everywhere, so fearful of God that anyone who is trained to speak about God is revered. And so the room was filled with silence when she entered. After a round of introductions and namastes and bowing of heads, I sat on a chair next to her only to be quickly told to sit on the floor. She did insist I remain seated on the chair but the voices against it were too many. Everyone wanted a guru disciple setting. She was the queen delivering a sermon receiving rapt attention. The cynic in me was ready with questions.

“There is a science to praying,” she started. “Without killing your mind, you can’t find God. We are big fools when it comes to our religion or our spiritual growth. We follow religion superficially. What it is to be a good person that part gets missing…” Hmmm..partly agree, I thought. But my question: Is there a God in this world, I only believe in the concept of right and wrong, good and bad and the consequences thereof. To which she replied: “My dear, there is something above being good and bad. In my opinion being a spiritual person or a religious person (though I would rather stick to spiritual and without spirituality there cannot be any religion), means where you work on your intellect, when you work on your level of consciousness, where you work upon your mind, where you learn the mechanisms of your mind and have control over it. It has nothing to do with God or with praying. The so-called chants of various religions are tools to bring attentive levels to the mind and it is a device to bring better levels of concentration to the mind. If someone chants Ram, Ram, Ram, it does not mean God is happy. The concept of heaven and hell is so childish. If I feel thirsty I drink water, similarly praying is a state of happiness for me and I help my mind to be calm, and in training my mind to be calm all the benefits are coming to me. That is why Buddhist religion does not have the concept of God and yet you have the most peaceful people. They are oozing with compassion and non-violence, and the feeling of universal brotherhood.”

Phew I had recorded her words and just produced it verbatim. So in other words, what Gurumaa said was in praying we are working the mind to be calm and removing all negativities with or without God. The practice is more important, it is not to whom we pray but do we have the prayerfulness in us? She also quoted something quite realistic. “I have nothing to do with that God who sits on a higher throne somewhere, I would love to have a God I can touch and embrace.”  She said there are misconceptions about God and people do not invest their time to explore this logically.

She made sense to me. I thought she was very well read and I was impressed with her English. I asked her if such a pretty woman like herself was never forced into getting married given that she comes from a male dominated northern Indian family, she replied she had supportive parents. Apparently Gurumaa realised her calling early in life and spent years meditating in Rishikesh and reading scriptures of all religions. I thought I could trade my career with hers given that it involves travelling round the world, talking and meeting people. Except I don’t know about the celibate part 

Mahesvari said…
:-) Nice interview, I also had the chance to interview Gurumaa about sex and power. If you want I can post the link so people can watch this interview.
02 September, 2013

The mad man said [sic] "You sound like a very desperate person. A single and frustrated woman who is looking for anyone to leave a comment on your blog so much so that you wouldn't even spare a spammer." Spammer being, the first comment on the previous post is apparently a spam, an advert for T-shirts. Bummer! I thought it was a handsome Spaniard or Latino, so I had replied "Hi Rodrigo", hoping to take the conversation forward offline. Anyway! All this the mad man found out. I didnt. Sure, I dig comments because I love the spontaneity and intelligence of my friends. And I didn't invite the mad m…
11 comments
Read more

January 21, 2007
Taking off from the Shilpa 'Shitty' issue (I love the surname and that comes from my ever so humorous and intellectual friend Latha or Lotty with love and Angel No. 1 to some :)), here are some reflections on being a north easterner in the capital of the world's largest democracy. Also, Lotty, on a serious note, says I should have a NE angle to what I write. She has a point. I have enough material there, enough to give vent to.

I begin with 'oye Chinky'. When I came to Delhi in the mid 1990s to do a professional course, I wasn't sure what the word meant. Maybe I was too busy paying heed to my new found independence and the certain sense of security -- the fact that I could go to the market even at 10 pm without the peering eyes of the army or the CRPF personnel patrolling the streets and stiffling our existence. It wasn't until my course was over and I got myself a break as a sub editor with the country's premier news agency, that I had my first hand exp…
5 comments
Read more

February 27, 2007
11 am: There I was bang on time at work, perhaps, in a long time. The occasion: a meeting called by the top boss and compulsory attendance required. I am, as always, out of the loop. Reason being there is always so much happening in my life that I am always behind everything. That does not mean I fail to deliver! And unlike some people who are truly into perception management (will delve on it later) and are such repository for all 'inside news', office gossip and politics least interest me. I mean, who cares if someone is quitting for some place else or is having an affair with so and so, or is being transferred unless that person happens to be someone I am generally fond of. Maybe then I would have been privy to some of the classified information ahem... So, was I in for shock today?

The meeting was sombre and had a full house attendance. And then our top boss spilled the beans. Three of the men at the helm were either quitting or were assuming other responsibilities and a ne…
6 comments
Read more