Some time back, I had read an article on Mumbai in Brunch, the Sunday magazine of The Hindustan Times. It was written by a young author who had grown up in the city, left it and then come back to resettle. The title of the article read something like ‘Mumbai has lost its soul’, cannot recall the exact words. The jist of the article was about someone returning back to his hometown and finding everything had changed – people didn’t speak the same language anymore, houses no longer looked the same, owners had changed hands and lives were crammed – almost like an idealism shattered. 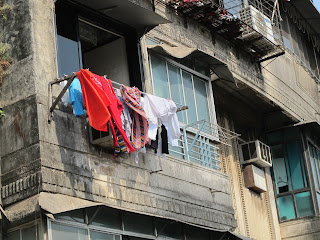 I did not grow up in Mumbai, and thank God. But I was visiting the city after about a decade and except for Juhu Tara Road, Fashion Street and the warm clime, there was not much in memory. My trip to Mumbai this time was coerced by Lolo’s curiosity about India’s financial capital, the documentaries on Dharavi and local trains that he had watched on TV and the fact that he often gets a ‘Oh, you have not been to Mumbai?’ Like one has missed out on the eighth wonder of the world.

And so we found ourselves booked into a hotel and flights. Giving us company would be our very own Deepika who never fails to give us company despite all her busy schedule and extra-curricular activities. It also helped that she is Ahmedabad, one hour flight away from Mumbai. Turns out, she was our saving grace in Mumbai. At the Chhatrapati Shivaji Airport, the excitement was palpable the moment Deeps and I spotted each other. ‘Let’s buy a taxi,” I told her as we got out. More laughter! And like giddy headed teenagers, she was telling me, “We won’t sleep the whole night, we will talk”. I could see smiles from travellers who were within earshot.

The drive to the hotel was filled with tension. I had booked into Park Royal Hotel, a grand name with grand pictures on the internet. As our taxi dragged its way into roads and a lane surrounded by dilapidated buildings, Lolo had a worrying expression. But the whole of Mumbai seems to be in ruins, I later consoled him. His expression did break out into a smile when the taxi stopped in front of this really new hotel which was filled with women travellers from Mauritius – colourful clothes and heavy perfumes which made me feel a bit nauseated. The rooms were super clean with absolutely white bed sheets and big too with big bathrooms.

We wanted to spend the second half of the day exploring Mumbai – do a tour of film city, walk along Bandra, etc. But seeking tourist information in Mumbai was an exercise in futility. ‘Go to Phoenix mall, this mall and that mall’, we were ill advised. Malls in India might be the new tourist fascination but not for the scenery and history hungry foreigner. And as it turns out, every venture to a tourist site was a disappointment. Film city was shut for security purposes and Bandra’s beach had barb wires – I presume the moral policemen don’t want canoodling lovers!

Our two days were just enough, proclaimed Lolo. By then we had managed to catch up with two long lost friends, visit Leopald Cafe made famous by Shantaram, spend some considerable time at the Prince of Wales museum and the Jehangir Art Gallery and also visit Mani Bhavan, Gandhiji’s haunt in Mumbai. For this, we have to thank our driver Ahmed whose immense knowledge about Mumbai kept us well informed. Mani Bhavan would not have happened had it not been for him. Perhaps the government should employ the likes of him to assist tourists who come unprepared for a decadent city such us Mumbai. But Ahmed also made us pass through the obscene house of billionaire Mukesh Ambani a few times. He also had his bit of gossip. “You know, 700 servants live in the multi-storeyed building’, he told us.  Were we impressed basing on the fact that Indian billionaires do not have a philanthropic bone in them!

Another tick off the list! The next time someone wants to visit Slumbai er Mumbai, we will just tell them to visit a mall instead and sit amid some ruins and brown, grey and depressing dirty buildings!