These are no ordinary Coolies. But true to their name, they thrive on manual work and rough it out under alien conditions. Every year, Melbourne’s De La Salle College churns out a group of students who work as coolies in India for a month. From building schools to houses, this motley group of students are quietly changing the lives of the poor. Or so it seems. 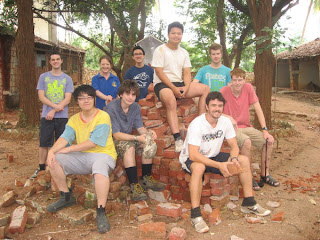 The De La Salle Coolies programme was formed in 2006 by Br Denis Loft in an effort to foster the idea of community service among his pupils. The name is a take from the Indian word ‘coolie’ or manual labour. Each year students from Year 12 register for such services in India after their exams and forgo the popular ‘schoolies’ holiday. “It is purely based on interest,’ says Christine Thompson, director of staff, De La Salle College.

What is more, the students collect $1000 towards the programme once they register and pay their own airfares. The school also raises money through its annual walkathon to contribute for such initiatives. Last year, the school donated $20,000 to Boys Town, a trade school for destitute and orphan boys near the temple city of Madurai. “We contribute each year. The annual walkathon raises in excess of $70,000,” says Thompson.

Inspired by his brother who took part in the Coolies project three years back, Phil Stevens was part of the group that worked with Boys Town in Madurai last year. Of course, like the others India was a big culture shock. “Everything was so different- from language to tackling curries in the mornings to the weather to living conditions. But we had a fantastic time experiencing different culture,” he says.
Camps Teacher Michael Wilson who accompanied the boys says, “At times it is quite emotional because it is not only physically challenging but you see a lot of things that perhaps you have not experienced before. It definitely gives you an appreciation to be definitely back home. You try not to take any things for granted.”

Last year’s team worked with the 80 students in Boys Town. “Each day after working three shifts, we bonded with the boys and helped them with English,” says Wilson. “The communication was tough and English was not spoken where we were there. But despite the language barrier, it is amazing how you can communicate through other means such as the smiles and sports. We learnt as much from them as they did from us I suppose.”

Another student Evan Shi who has been a ‘coolie’ says the enjoyable part is getting to know people and “doing stuffs for others”.

The De La Salle Brothers have been working in Andhra Pradesh since 1990 to give lower caste Dalits greater educational opportunities through La Salle Keesera School which educates 900 Dalit children. In 2009, there were 20 Coolies and they were split into two groups. Last year, there were seven volunteers. This year, nine boys have already filled out their forms. “We are expecting a big group this year,” says Thompson.

Thompson is also proud of her students’ ability to cope without a single complaint. “They observe that the children there have very little and still get by. So they cope very well and show the determination too that if they can do it so can they.”

“It is wonderful to be part of it, we enjoy watching our boys, their reactions and interactions,” says Kate Milroy, a teacher who has also been a part of the programme. “They learn a lot about human nature, they learn that they got to respect people and appreciate whatever they see, because there is something special about everything.”

Thompson recalls how hearts were broken when the old houses were demolished and how there were again tears of joy at seeing new ones come up next to the demolished sites.As Br Loft puts it, “the Coolies programme reveals a passion and unselfish approach to social issues. Participation is a real testament to the courage, enthusiasm and generosity of those partaking in Coolies.”

Some students who have been in the projects summ up: “it is a lifetime thing” - the experience of learning, appreciation, and giving and the joy of having made a difference to someone else’s life.”