October 31, 2011
As we arrived at Melbourne airport, I was impatient to hop on to the flight. “Hurry,” I told Lolo as I saw the long queue. He replied, “I can’t be bothered standing there, too many people.” Surprised, I insisted we join the queue before it got even longer. Then I heard a whisper, “Haven’t you figured out?” I looked up again at the signs. I jumped! We were flying business. My best surprise for the evening. Bali began on a good note. 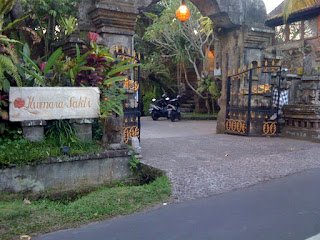 But much as our departure was kingly, our arrival at Denpasar airport had a comic interlude. There was no one waiting with the sign “Laurence & Indira”. As an Indian, my first thought was “ah duped by the travel agent” (well it happens so often there that you can’t be blamed for thinking otherwise!) So while I made Lolo take care of the luggage, I was giving the men in placards an eyeful of me when I heard a kind, faint voice say, ‘Go to the information counter’. When I did find the counter, an announcement was made and I saw our host dressed in traditional sarong, headgear and garlands run to us with a placard that had our names in the tiniest of fonts. I would have missed him even if he was there right in front of the crowd.
“My friend, where were you?” I asked, half amused.
“I have been here for three hours. I am so tired,” he replied. At that, my face broke out into a smile. We were all tired for reasons best known to us.
A few minutes traffic jam and we were out of the airport driving through narrow roads, busy traffic and women on mopeds before we arrived at Bali Ayu, a villa property with Balinese architecture, in Seminyak. The bathroom floor actually had small pebbles and each time I stepped on it, I felt I was in a jungle. An incredible introduction to Bali the first night!
Driving to Ubud, our much awaited destination for our yoga retreat, I felt this is totally us – the life we imagine – green paddy fields and jungles, exotic, quaint architecture, small shops and cafe, peaceful people and surrounds. I had an inkling we were going to love every bit of the experience that lay ahead of us.
We checked into Kumara Sakti, residence of the second prince of Ubud, now converted into a resort, of course. With its ten bedrooms, two swimming pools, a dining hall, a spa and a yoga hall that opens into the jungle and paddy fields, Kumara was an intimate paradise on its own. The smell of flowers and incense sticks wafted in the air. It was a place that made bonding easy for the 16 of us who arrived from Australia, Canada and Hongkong for the retreat. For the next five days, the ancient narrow stairs and alleyways would resonate with our laughter and chatter.
I had read stories about yoga in Ubud and how such a small mountain town on a speck of an island had become one of the most popular yoga destinations of the world. It is also in Ubud that famous writers and artists have found a haven. Take Elizabeth Gilbert’s Eat, Pray, Love, though I think anyone can do a Gilbert if you are at a place that allows you to only do these three things J. Jokes apart, having been there, I can now vouch for the fact that Ubud does have the ingredients for a perfect yoga destination.  It is just not yoga alone but the combination of other activities such as biking, trekking, participation in local cultural activities that make the experience so holistic. (More on this in my next post).
I had imagined it to be hard waking early on a holiday but I did not loathe getting up at 6:30 am everyday to the sound of the bells. The place had certain energy about it. 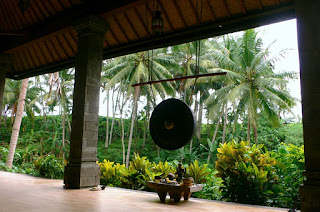 Our yoga hall overlooked the jungle. The sound of the gong saw us assembling and the chants of Om transported us to a world surreal.  Earthy and relaxing, we spent all mornings and evenings for the next five days of our stay learning and re-learning yoga from Viviene, our teacher from Melbourne. Her enthusiasm was infectious and by day two, the hall became a room of people who had the spirit for yoga. The classes turned to good times, and bonhomie turned to friendships.
Making friends here felt so natural as we opened ourselves to each other. There were Colleen and Albert - charming and affable, by the end of the retreat egged on by them we were dancing on the floor to a wild night of Latino music. Diane, generally quiet and soft spoken and an ex-army phsio therapist warmed herself to the group as Di, and she did give us a glimpse into the wild dancer in her on our last night. There was Kerrie C, jovial and entertaining that stories of her childhood sweetheart Peter became a familiar tale, some even dreamt of him, i think! And who can forget young Lauren, whose Playboy Mansion photos had everyone jumping off their seats over dinner. Lauren’s interesting experiences and photos were a source of great laughter and it even inspired Geoff, another gentleman in the team, to confess that of his photos on his iPhone one that was dear to him was that of his vacuum cleaner. I still have to figure out the intimacy between Geoff and his vacuum cleaner.
Then there were the delightful company of the duo – Ro, a gardener by profession, and Kerri F, a social worker. Ro was a bundle of mischief and her observation of everything from people to plants was laced with humour. The rest – Sue, Peggy, Genevieve, Jaci, Katie – were all a perfume – different scents for different mood; some serious, some quiet, some funny, some not. They add to what is called the versatility of life.
Making friends become not a big deal anymore after a point of time in life for most, but my Bali holidays show that life offers delicious moments when the mind stays open and you welcome newer experiences, newer people and newer joys into your lives.