June 05, 2008
With more than 10,000 beaches I know know why Australia is called the land down under. I am not a sea person. I barely know how to swim, I hate the creepy plants that grow in water, the spooky huge black rocks and I have immense water phobia. I even feel scared of the bath tub. So, when I see people snorkelling and scuba diving, I tend to think they have some guts. But my recent trip to Australia, my second in six years, have made me overcome some of that fear.

There is something about watching the ebb and flow of waves... the sea mystifies me as it does others. As you stand before the sea, you cannot even fathom its horizons - endless, vast, overpowering - you feel so small. The sound of the waves is haunting and reverberates as you walk along. I enjoyed the long, lazy walks along some of Victoria's pristine beaches and experienced a catharis of sorts. I did something to that effect too. Threw away some belongings as a goodbye to a past... Like good riddance to bad rubbish. But ask me to jump inside the waters, well that will take some more time before I establish an affinity of sorts. So, all my friend's hopes of skinny dipping, the way Australians jump into the high seas, shorn of any inhibition, was washed away.

Driving the weekend away on the Great Ocean Road was a breathtaking experience. Trapped between the seas on one side and the lush mountains on the other side, the 223 km long road leaves you with an overwhelming feeling. The road signs are great and amusing, they tell you exactly how to drive, warn of speed limits, bends, turns. And the roads so perfect that it is sort of disquieting for an Indian traveller who has probably seen more potholes, more broken roads, more vehicles and much noise than any other traveller on this earth. 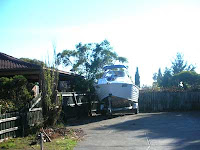 n you come across so many scenic sleepy fishing towns. Men waiting in patience angling baits. But the ultimate boring thing on earth for me. "Just buy the fish and eat," I felt like voicing my thought aloud. But as friend says, the pleasure is more in the catch. I guess, I guess.

My sister's neighbours in Melbourne have boats parked oustide their houses. In fact, every suburb has houses with boats in the parking lot. People here naturally love the sea so much. They grow up playing in it the way we grew up playing in the backyard. So, even in the heights of winters, I saw people come out with their surfing boats and dive into the chill. I asked my friend what pleasure they find snorkelling and scuba diving. He thinks the adventure is unparalled. As fond of as I am of 'other' adventures, I wish I could think on the same plane!