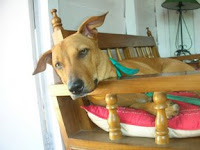 Three weeks ago, I sent Dylan home to the north-east. I had my reasons. I thought he would find a permanent home among people who will love him and care for him, such that I wouldn't have to worry about his future. Perhaps, I made a gross mistake.

On reaching Guwahati, Dylan was welcomed with open arms. The welcome was but short-lived as everyone feared him because of his size. And the more he warmed up to people, the more people distanced themselves from him, save my six-year old niece Likla who showered him with all the affection and love that he so badly craved for. She had no fear but lots and lots of love for Dylan. They became thick friends within moments of his arrival. 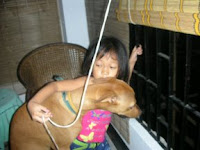 But with the rest of the family taking time to adjust to him and vice versa, Dylan became more of a burden. So a dog-lover family came forward to adopt him and he was given to them. But being hyper and irritable, he just could not adjust in the company of that doting family and when I reached Guwahati on the 28th of September, Dylan was at home basking in the company of my niece and my younger sister -- his only two soul mates in a sea of people. I was glad to see my baby, adjusting to the muggy weather, the mosquitoes and the red sands. Some divine intervention too, I thought. At least, Dylan could be with me for as long as my holiday lasted.

Till my sister and I were around, Dylan behaved. A few days later, after the ceremony of my mom's first death anniversary, we travelled to Shillong, a three-hour drive from Guwahati. The green pines and the clean air enveloped us as our car touched Barapani, the largest and most scenic lake of the region. The car sped on as Dylan snoozed. At approaching the gate to our home, he hopped off the car, full awake by then. We have a field and he ran and ran. It seemed he found his home. He loved the hills and he loved the space. He ran miles and miles. We discovered his breed too. A famous family friend vet said he belongs to the whippet hound category. Not that I cared. But Dylan became the talk of the town.

A whole lot of people came forward to adopt him. My sister and brother-in-law did not want him. First, it was a family of politicians that took him. He lasted precisely four days and came back bony as hell. The MLA of the house said they have a stream of visitors everyday and Dylan was feared by all. Being a politician, he couldn’t afford to keep visitors away. The next day, I had to leave for Delhi. My sister was in a quandary – torn by love for Dylan and pressure from family to find him a home.

After a bit of drama (I skip that part), Dylan travelled back to Guwahati. Finally, he is in a crèche for dogs run by Peta. There he will undergo training. Visiting him everyday is a best friend of my sister-in-law, my namesake, who is a dog lover. High breed dogs are apparently used to only one master and are loyal. So, Indira takes Dylan for walks and as advised by vets, calls him by a different name so that he slowly forgets his past and recoinciles himself to a new environment, a new family and a new home. Hopefully, Indira will be his family. And hopefully, Dylan will forgive me…

Jayant said…
Awwww. I know exactly what you must be going through. :( It's like giving away your baby, isn't it?

It's nice that there is someone who's taken such a liking to him. It could've been much worse. In fact, I'm glad it didn't work out with the earlier people. At least, this way, he's still within the family, almost.

ASH THE SEEKING MAN said…
I exactly understand your emotions--my heart goes out for you--wish I could keep him i my house in guwahati--it a big house and full of life
24 October, 2007