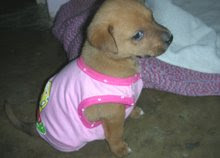 The countdown begins. Not to the Miss Universe contest, but of Dylan leaving Delhi. My sister and I have decided that the next best home for him is our very own hearth in Guwahati or Shillong –- among the company of my niece, nephew and all our family members. This decision to shift Dylan came after much thought. We are on the move, so we needed to find a permanent home for him. And what better than our very own back in the north-east.

We had initially mulled putting him in one of the shelter houses for dogs, but didn't have the heart to do it. The thought of dumping him off with a bunch of unknown group and people was unbearable. Some people even offered to buy him but we kept thinking whether the new family would genuinely take care of him. Dylan is a spoilt brat and the family would have lost patience by day two, we realised. 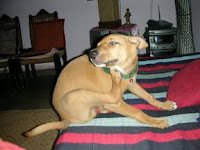 A few days back, our immediate neighbours volunteered to adopt him. "We will keep him free and secure in the backyard," was what they told us. We passed that one too knowing how much Dylan hates outdoors -- he hates the big ants and he hates the hot sun. In the end, no option was worth it. So in exactly seven days, Dylan will board the flight to Guwahati along with my sister.

On Monday, we took him to the vet to get his travel certificate and a regular check up. It's funny how he refused to climb down from the doctor's table, while the queue of mongrels, alsations, pomeranians and others kept growing. Finally, he relented much to our relief. Next, we got his size measured to make the kennel to t 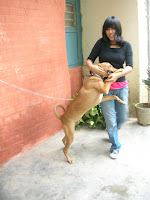 ransport him. The man who measured Dylan said he is too long, and now we have a kennel that weighs more than 10 kg and occupies half the space of my lobby. Worried sick that the flight charge is going to be obscence. But some things in life come at a heavy price!

And heavy I am at the heart. This love of my life is going to make me crazy after he leaves. I love him so much. These days, my family is getting a real taste of my nagging, cos I call up to make sure that they know his food habits and that his arrival is being well prepared. My neice and nephew are already crying hoarse for Dylan. I think I have managed Dylans's PR well.