May 09, 2007
This was the theme of the non-stop 36-hour weekend workshop our office conducted. Theory of evolution, actually, basing on how we were all jumping around like monkeys. Anyway... the trainers' aim was to transform us all into more productive individuals -- getting us all to talk openly about our problems, understand each facet of the organisation and interact with those whom we barely get to otherwise. The intention was good, no doubt! 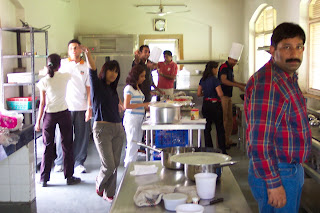 And so the whole office got together amid a Big Brother kind of setting. Thus, we were divided into teams, given our kitchen, tents, coupled with games, classroom sessions, mystery solving a la Sherlock Holmes style driving around the capital from 8 pm to 1 am chasing six clues, obstacle course, etc. Some nearly sacrificed their lives for their teams -- the casualties included a fractured leg, a hurt back, and a few cuts here and there, all in the bid to beat the other.

Well, I had planned to bunk it all. But a phone call at 5 am from my young, enthusiastic British colleague, found me jumping off my cosy bed and packing my stuff ready to beat the drill. So there were we at the venue by 6:40 am. It was scheduled to begin at 6. Not a disgrace to begin with, because we were early compared to the outstation guys who were taken for a joy ride in the confusing new layout of Gurgaon. So, a rather disapppointed Colonel and his team began the session past 8 am. 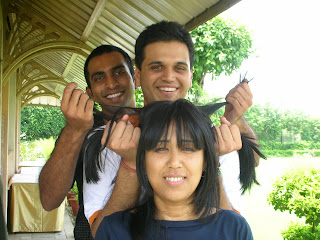 My yen for a good cup of tea to begin with was squashed, turns out we had to earn one. Ufffff... points for cooking, cleanliness, punctuality -- everything that did not define me. (For a moment, it was recoinciling myself to an atmosphere in which I just didn't fit). Finally, after setting up our team tents, we were introduced to the kitchen and bubbbly Pooja, also the recipient of the most talkative person award, came to my rescue. Annoyingly sweet and helpful. Like I tell her.

The rest of the day was all about dumbing down of some gyaan from the trainers, some games, break for lunch, dinner and finally the most fun part, drving around the capital to solve a murder mystery. The clues were a little far fetched but my over enthusiastic team managed to crack it to finish second. I and Vishaal, in our new-found revelry took the backseat literally, enjoying the seriousness with which our team took up the tasks-- tension, anger, frustration writ large at times. Funny part was when in the stoppage to our second clue, I spotted a paanwallah and jumped off the vehicle. The team thought I had hit upon the next clue. But as I told Vishaal later on the way back, "I was in sixth heaven" breaking rules and paaning supari and tobacco. 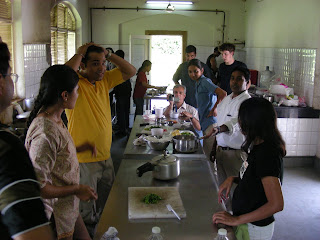 Then at 3 am came the most eventlful part of the session.We were taken to the field nearby and given military training. They called it the obstacle course -- jumping over poodles of water, climbing piddly heights, crawling through the mud without touching the ropes, jumping over 6-7 benches --teams that fouled had to repeat. I did quite well, the north east rebel in me surfacing as I told laughing colleagues! And then Team A was given a chance to rework their timings of 6 mins. Young Henry sped off like a possessed soul and just as he jumped the benches, he lost balance and fell on the ground. For a few minutes, there was silence, first aid was called only to find the box empty. Henry was writhing in pain and couldn't move his ankle. And when amid the chaos and the pain, he asked for me, I realised that was what friendship and trust was all about. Classroom sessions or no sessions, I would like to believe I earned my wings... at least friends found me dependable. 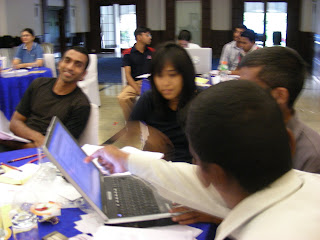 The episode was a dampener. But briefly. I wouldn't say the workshop was not without its merits. At the end of it all, everyone enjoyed. So did I. My only conclusion: there is so much wisdom in this world and I don't want lessons on it. I want to acquire wisdom out of my own experiences. Agreed, it is individual productivity and competence that organisations aim for, but that is not far to seek. Creating a relaxed, healthy work atmosphere speaks louder than anything -- it is the first step to growth.

PierreF said…
Here's a message from the Mutual Affection Club... henceforth to be known as MAC.

Anonymous said…
oye u are defined by cleanliness, who else cleans their closets at 11'o clock at night :)
17 May, 2007

Indira said…
Vishaka, that was one of those days when I was caught by the cleanliness bug. come and see my house now...
17 May, 2007

Anonymous said…
I am glad you guys enjoyed the whole thing while I was snoring away to glory. Of course someone called Pierre called at 6.30 to find out if I would make it. Huh. Nice Blog Indira... you write from the heart. That's what makes the reading enjoyable as someone just said in our office... no jargons huff puff... Enjoy and keep writing. Sanj
18 May, 2007